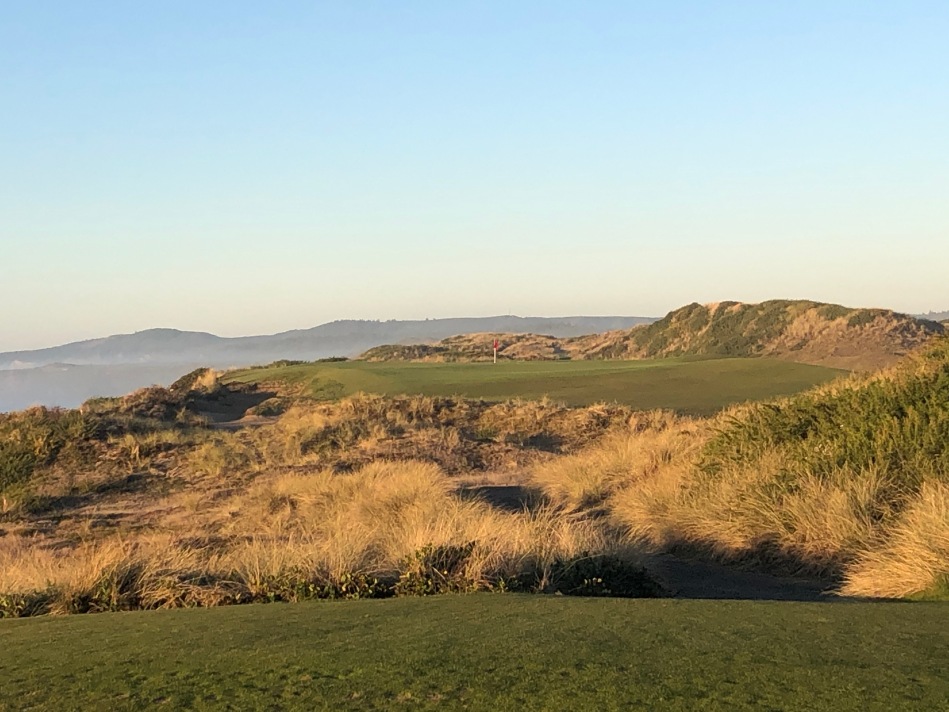 Bandon Dunes is the original course at what has become one of the most unique golf destinations in the world. The David Mclay Kidd design wanders along the coastline providing some of the most dramatic backdrops in the game.

The first hole built on the entire property was the par 3 twelfth. From an elevated tee box, players are presented an unobstructed view of the Pacific Ocean. While it is not overly long, the wind will almost certainly make club selection difficult. The green seems large from the tee, however a bunker situated just short makes the shot very challenging, and once on the green, a two putt is no guarantee.

In some ways, this hole is a perfect representation of the Bandon Dunes golf course. Visually, the property is spectacular and can look a bit daunting, however the course itself is very playable. This course will present challenges but will also reward good shots with good scores.

On the front nine, the first real visual of the Pacific is the fourth hole. The dog leg right leaves the dunes and approaches the vastness of the Pacific on the second shot. The green has no backdrop and has an infinity feel to it. This hole beings a stretch along the coast that heads north.

The fifth and sixth holes play along the water and are very exposed to the ocean breeze. While not overly long on the scorecard, both holes require precise shots to the green. The fifth is a par 4 that requires precision on an approach to a green that is cleverly nestled within the dunes. A bunker guards the right side of the green and will catch anything that lands on the right third of the green.

The back nine heads out to sea on the aforementioned twelfth hole and then again on the fifteenth and sixteenth. The sixteenth hole is probably the most photographed hole on the property. The hole only measures about 300 yards but offers players all sorts of options off the tee. Layups to the left are the common shot, but a strong driver over the gorse offers the more aggresive player the opportunity to drive the ball near the green.

A common theme throughout the Bandon Dunes golf course is the fact that conservative play will allow players the opportunity to post a decent score. All of the fairways have a wide landing area that can be played to and most of the greens are fairly large. The more aggressive a player chooses to get, the more difficult the course. Particularly off the tee, the challenge really becomes severe the further down the fairway player get.

The seventeenth hole heads back towards the clubhouse, but the views are no less spectacular. The cliff on the right side of the hole is in play both off the tee and especially during the second shot. The green is much more approachable from the right side of the fairway, but the more common play off the tee is to the left. Just to make sure players don’t get too close to the green on the left, there are a couple of pot bunkers standing guard. This is yet another example of the risk/reward nature of Bandon Dunes.

The eighteenth hole is a par 5 that will give longer hitter the opportunity to hit the green in two. It is a nice way to end the round and will once again reward good shots. While it may not be one of the stronger holes on the course, it is an enjoyable way to culminate an incredible journey.

Of all the courses on the property, this course felt the most playable. It was fun to play the course in multiple winds and see how the same hole can play so different. The combination of view and playability made this course very enjoyable.

Rule of the Day

New Rule: Under Rule 11.1, for all accidental deflections, including when the ball hits the player or opponent or their equipment or caddies: